How and why did the McCanns manipulate the media?

Lord Bell explains…and we have to ask was the money from the fund? Money donated to search for Madeleine?

Lord Bell, founder of Bell Pottinger quoted in a book written by Owen Jones. He is commenting on the ‘Hacked Off’ campaign, and he says he doesn’t care what the McCanns think. ‘They paid me £500,000 to keep them on the front page of every newspaper for one year and that’s what we did’.

Maddie case – Press was manipulated in exchange for photoshoots

Thanks to ‘astro’ for translation

…
The McCann couple took four hours to outline their strategy, went out for walks on request from the British photographers and escaped the Portuguese

Kate and Gerry McCann controlled the British media in the news coverage of their daughter’s disappearance. In order to avoid criticism from the English press, Maddie’s parents offered photoshoots, some of them during their usual morning walks in the Algarve – which were apparently routine, but previously arranged, as Kate’s notes reveal.

“The British journalists were annoyed because they found out too late that I had been in the United Kingdom. It ended up with Justine receiving loads of phone calls and arranging for a photoshoot on the way to the church, to pacify them”, Kate writes on the 5th of July, revealing a tactic that was adopted in the first days after the 3-year-old girl disappeared.

“Dress up and go for a walk. It had been requested by photographers and agreed that for sentimental reasons it would be good”. This walk happened on the 7th of June, three days after Kate registered that she had been “annoyed” about the presence of Portuguese journalists outside the apartment. Before that, on the 19th of May, the photoshoot for the English newspaper ‘Sunday Mirror’ was previously arranged: “Us spending time with the twins for the Sunday papers”.

In the same notes, Kate expresses distress about the Portuguese and the German journalists. On the 11th of June, in Morocco, after Kate made a positive evaluation of the trip because there were so many photographers present, the doctor remembers “noticing” Portuguese journalists. “We didn’t want to give them a story”, decided the McCanns, who classify the questions from the Portuguese as “sleazy and unexpected”, even after preparation meetings that last “four hours”: “I was very angry at a journalist today. I told her not to do so much detective work.”

Concerning the editor of the ‘Sun’ newspaper, on the 11th of July Kate was assured that there would be no “adverse publicity”: “She was really nice. Perfect solution”, Maddie’s mother noted.

McCLIP – Wendy Murphy Former US Prosecutor “I’m not buying it..”

One of the country’s leading criminal defence lawyers has accused
sections of the media of waging a “misleading and self-interested”
campaign over the UK’s privacy laws, and questioned whether there is any
public interest in exposing the private lives of footballers and
celebrities.

Angus McBride, whose clients have included Kate and
Gerry McCann and the England football captain, John Terry, says that he
does not believe that the media in this country has “earned the right to
unfettered freedom of expression”.

Drawing on his own experiences
working for the McCann family in the months after Madeleine was
abducted, he recalls visiting a number of Fleet Street editors to ask
them to show restraint in their reporting, particularly over some of the
wilder uncorroborated claims that were being circulated by the
Portuguese press.

“It is fair to say that a number of the editors
listened carefully and their subsequent reporting reflected … the fact
that they understood that to report the allegations would be immoral,
scurrilous and damaging to the efforts of many to find Madeleine
McCann,” says McBride, a partner in the firm Kingsley Napley.
“Others,
however, listened coldly and made it quite clear that commercial
pressures trumped completely the rights of these two tragic parents and
their daughter.

“I was told this ‘whodunnit’ mystery was one of
the biggest stories in many years … and that the truth of what had taken
place was not going to get in the way of that line of reporting because
that is what the public wanted as evidenced by the increase in sales.

Thanks to Complete Mystery of Madeleine McCann – http://jillhavern.forumotion.net/t3664-angus-mcbride-mccanns-former-lawyer-tells-how-he-manipulated-media

MCMINUTE: McCanns need to maintain an ILLUSION in Britain

£30,000 spent on HANOVER an expensive PR firm, who did such a great job changing media reports of HOSTILITY to SYMPATHY after the McCanns return to UK they won an AWARD in 2008! 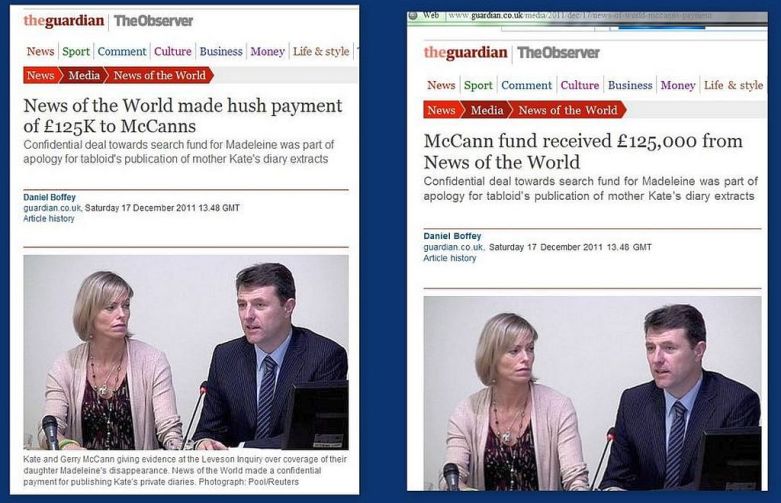